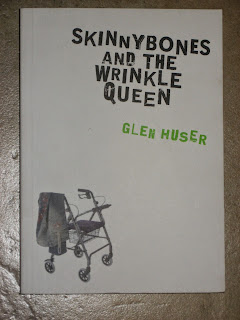 “Did you hear?” our school librarian asks? “Glen Huser has a new book out.”

I had heard. I also knew he was coming back to the city for a launch at my favorite bookstore.

“Are you going?” She waved the ad for his reading in front of me. “You’re a friend of his, aren’t you?”

I am and I am. “For sure I’m going.” Not only is Glen a friend of mine, he taught with my mom for many years. She’d be with me at the launch if she were still alive.

The bookstore is crammed with people the day of Glen’s appearance. Many are teachers. It’s like old home week, a chance to catch up with people I haven’t seen in a while, a chance to reminisce about Mom, a chance to chat with Glen.
Um, not much chance of that, I think as I see the crowd swarm around him with cash and credit cards clutched in their fists.

I don’t like YA books and that’s what Glen writes. As everyone else saunters around with several copies of the book clutched in their arms, I’m guilted into buying one.

After the reading I join those waiting for his autograph. The long line behind me precludes a lengthy chat, but we do manage to exchange a few words.

Glen’s book sits on my shelf for several weeks until guilt again forces me to take it down and read. After all, it’s Glen’s book. The least I can do is give it a try.

“Aren’t you coming to bed?” my husband asks. “It’s after midnight.”

“Yeah, in a minute.” I finish the book that night. I reread it the next day.

I tell everyone I know to buy it. Since then, I’ve read it several more times. My delight in the story and my admiration of Glen’s writing skills grow with each reading. Someday my granddaughter will inherit it. She’ll love it too.

But what my husband, my librarian, and the people at the book signing don’t know is that Glen played an instrumental role in my writing. I happened to mention to him one day that I had been playing with a story in my head for about a year and thought maybe I should try writing it. He listened politely as was his usual manner and said, “Oh well then, you’ve done the hard work of pre-writing. What are you waiting for?”