The munchkin beating on what’s left of her Peppa Pig piñata.
The best kid’s birthday party 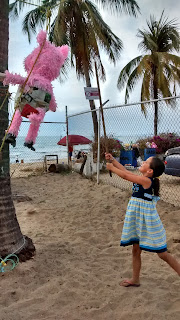 The munchkin beating on what's left of her Peppa Pig  piñata.
Happens in the street. Yes, the street. In Mexico, that is. And it’s the party our munchkin has chosen for her birthday.
Tables are set up for the cake and food and gifts. Chairs line the sidewalk and curb. The piñata is strung up over the street. Everyone comes—kids, parents, grandparents.
Chicken or pasta salad is served on tostadas, agua de jamaica (made from hibiscus petals) is the favored drink.
The kids play, everyone eats, and then it’s time to sing as the children from youngest to oldest take turns trying to break the piñata. Usually it’s up to one of the teens in the crowd to administer the final blow so the kids can scramble for the candy that tumbles out.
Group photos are taken and candles lit, Feliz Cumpleanos sung to the birthday child, and cake served.
Several hours later, replete and happy, the kids go home with their parents, toting their goodie bags.

Time travel in our own town 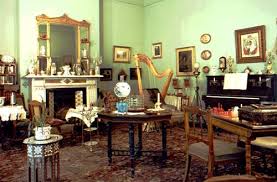 Since moving to Victoria, we’ve been exploring our new city and recently discovered yet another treasure – Point Ellice House. This National Heritage Site, overlooking the waters of Victoria’s scenic Gorge Waterway, exudes the peace and charm of a former time.

Peter and Caroline O'Reilly moved into the Point Ellice House in time for the birth of their daughter Kathleen December 31. 1867.

The house remained in the family's possession for 108 years.

What makes this “museum” truly unique is that in 1975, three generations later, O’Reilly’s grandson, John, and his wife, Inez, sold the house and all its contents to the Province of British Columbia. The family left behind everything – furniture, clothing, toys, tea services, a harp, writing desks, board games, kitchen utensils, and more  – giving us a rare opportunity to see one of North America’s largest collections of Victoriana in its original Victorian home.

On seeing the parlor, my granddaughter said, “This must be the playroom!” Chess set, piano, harp, toys, tea sets ... definitely the playroom.

http://www.pointellicehouse.ca/
Posted by Unknown at 9:23 AM 2 comments: 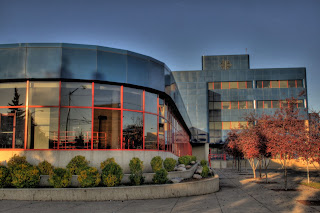 Since I’ve been in leadership positions, I’ve learned that there are four ways you can get lucky when it comes to staffing your school.

Another is seeing in action:

Yet another is interviewing:

And then there is the “given” category:

Within a few minutes of meeting the individual and a few days of working with him, you know that someone up there loves you because you now have David, who will prove to be an absolute gem as your new assistant principal.