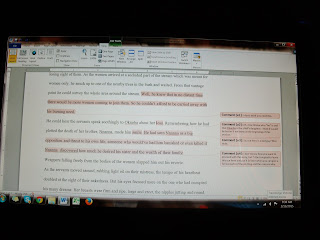 I wrote a book, something I’d yearned to do since childhood. I naively thought I’d start at page one and proceed in a logical fashion to “The End.” Instead the story came together in fits and starts with a whole lot of organizing, reorganizing, writing and rewriting—much of it done at night when I suffered from insomnia. Scribbles on yellow sticky notes, written in the dark, barely decipherable in the morning, eventually came together as a novel.

In all of my childhood dreaming, I had never considered the roller coaster of emotions that would come with the author role.

Initially, I told no one about my writing, rather embarrassed to presume to have the ability to put myself somewhere among the ranks of my favorite authors. But

I couldn’t just leave my baby, er, I mean my novel, sitting on my computer so I joined the provincial writing guild and became a member of a critiquing group.
We were strangers on a mission, all new to the business of being an author, but determined to succeed and intent on helping each other reach our goals. Meeting once a month, nervousness morphed into confidence—not only of our own work, but also of the members’ genuine desire to help, not insult or hurt.

From the critiquing group I progressed to working with a writing partner sending work back and forth, brainstorming ideas, and making corrections. With a completed manuscript it was time to search out agents. I trotted off to the post office and, hands trembling a little, handed my letters over to the clerk.

I waited, impatiently for the post man. Replies did come—eventually. My heart beat faster, my hopes rose. I tore open the envelopes.  Rejection. Rejection. Rejection. Hopes dashed, I glared at my computer, gave it a figurative kick and left it standing alone and lonely on my desk. This period of gloom lasted anywhere from a few minutes to a few hours after the receipt of one of those letters.

Refusing to give up, I started to write a second novel while preparing more queries for the first. Eventually a fat envelop arrived. My heart lept. This had to be good, right? All the others were skinny with little “Dear Author” notes inside. A fat letter had to be a positive response. Not! Rejection and pages of agent advertising urging me to spend a bundle of dollars on various services they just happened to be able to offer. Angry and frustrated, I debated quitting. Any sane person would give up. Not me. I persisted. I kept writing.

It was at the Willamette Writers’ Conference (not the first conference or workshop I’d attended, by any means) that I first heard about self-publishing. My writing partner and I pitched to an agent. She was positive, asked to see our work. Elated, we drove home plotting our future. A couple of weeks later we received identically worded rejections from this agent for two very different genres and writing styles. Angry at first, frustrated beyond belief, then overcome with laughter, our determination solidified. That was it! No more agonizing.

Persistence paid off. I now have six books published (a four novel science-fiction series, one collection of short bits, and a contemporary novel) available in all formats. Ideas are swirling in my head for book seven. Now to get them to settle down into a logical order so that I can write it.