What are the aliens up to now? 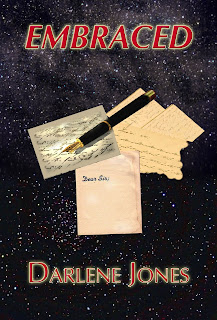 Hi, I’m Curtis. Mrs. Jones—that’s her on the camel—put me in one of her books called EMBRACED. Sounds pretty mushy to me. Anyway, she says I have to tell you a little about the story.

Miss D, my school principal came to me one day with this page of scribbles. She thought it was some kind of code and she wanted me and my buddies to try to figure it out. I like Miss D and all. She’s not bad for an adult. You can talk to her and she doesn’t make fun. But, sheesh, a code from aliens? Anyway, to keep her happy, I said I’d help.

Thing is, once I started studying the scribbles, I could see messages. I told Miss D that Coder Guy (that’s the name Miss D gave to whoever was sending the messages) wanted her to fix things. Of course she asked what things? I didn’t know so I made up some stuff. Miss D wrote letters to newspapers using my ideas and the things she asked for started to come true.

She even let our class write letters on this fancy paper she had and the things we asked for came true too. Kinda spooky, eh? But fun. Secretly I wished Coder Guy could get rid of my zits and help me lose weight so I wouldn’t be such a geek. I didn’t tell Miss D that, but Coder Guy must have read my mind or something cause now I’m taller and better looking and the girls are starting to talk to me. Miss D says everyone changes, but for me it happened awfully fast so I think Coder Guy did it.

Now Miss D is in the hospital. She’s all screwed up by the messages and the letters and this guy named Sam. I think she really liked him, but he dumped her or something and that sent her over the edge. I’m going up to the hospital to see her now.

Oops, Mrs. Jones just told me not to say too much. Doesn’t want any spoilers for her book so you’ll have to read it to find out what happens. But she did tell me I could let you read an excerpt so here’s one for you.

“More drawings?” Curtis gestured at the papers she held.

Abby looked down at the pages and willed her hand to stop trembling. The three pages of code drawings seemed to shimmer and shiver with a life of their own. “Yes. Three pages. From Friday, Saturday, and last night. They’re pretty … they’re … pretty well done, I’d say.”
But Curtis was no longer listening.  He waved the papers she’d just handed him and almost shouted with excitement. “These are amazing. Way better than the first drawing you brought us.”

Abby stifled a small grin, but she had to agree. The drawings outclassed her scratches a million times over. “My friend developed instant artistic talent.”
“I’ll say.” Curtis shuffled the pages back and forth. He shook his head slowly and muttered “wow” over and over. Finally he looked up at her. “Miss D, thanks for getting so many. Now we have four to compare. We’ll see if there are any repeated patterns or sequences of symbols. Your friend is great to share these with us.”

“No problem.” Oh God, I’m such a liar. Of course there was a problem, and not just because she was lying to Curtis. My friend. How lame was that? The mere existence of the pages was the real problem. Some nights the clickings chattered incessantly in her fillings, almost driving her crazy.
Those were the nights of very little sleep. The weekend had been eerily silent. That was a new phenomenon since Friday, no clickings, instead Coder Guy had begun leaving the pages filled with drawings. Either way—no escaping the code.

A while back, she’d grown tired of sharpening the pencil she used each night and replaced it with a pen, which was now almost out of ink. She’d have to remember to get out a new one tonight. Or maybe not? What would happen if there was no writing utensil?

“What’s so funny?” Curtis asked. Abby hadn’t realized she’d laughed out loud. The lack of pen wouldn’t stop her night visitor. She stifled another burst of laughter she knew bordered on hysteria. Truth was, much as the pages of code scared her, she’d be devastated if no more came. The person—being, alien, Coder Guy—was an integral part of her life now; his existence had established a rhythm that kept her balanced. Or so she thought. Maybe she was completely off her rocker.