Smash all the Windows

Smash all the Windows by Jane Davis

For the first time in my reading life, I finished a book, turned back to page one and started reading it again. The story and characters so compelling, the story telling so complex, complete, and often subtle—I simply couldn't just move on to another book.

But the more urgent need for the immediate reread came from the emotions evoked.

They happen far away to people we don’t know. We, on the other hand, are tucked away in our safe little corner of the world, cocooned by family and friends, smug in our security, subconsciously believing “that will never happen to us.”

Focusing on a few of the individuals connected to a Tube accident in London blamed on the dead, Davis shows the harshness of the impact on the families of the dead and the burden of sorrow they carry that lasts forever. Davis shakes us out of our complacency and rightly so.

What inspired the novel?

Davis says: The novel began with outrage. I was infuriated by the press’s reaction to the outcome of the second Hillsborough inquest. For those who don’t know about Hillsborough, a crush occurred during the 1989 FA Cup semi-final, killing 96 fans. A single lie was told about the cause of the disaster: In that moment, Liverpool fans became scapegoats.” Read more HERE 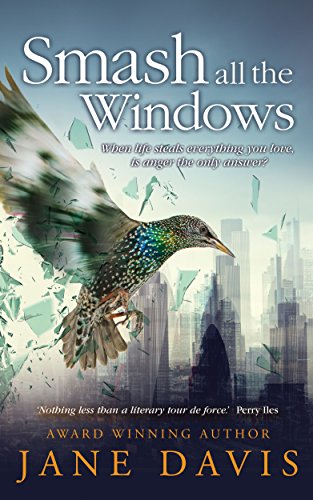 It has taken conviction to right the wrongs.
It will take courage to learn how to live again.
‘An all-round triumph.’ John Hudspith

For the families of the victims of the St Botolph and Old Billingsgate disaster, the undoing of a miscarriage of justice should be a cause for rejoicing. For more than thirteen years, the search for truth has eaten up everything. Marriages, families, health, careers and finances.

Finally, the coroner has ruled that the crowd did not contribute to their own deaths. Finally, now that lies have been unravelled and hypocrisies exposed, they can all get back to their lives.

If only it were that simple.

Tapping into the issues of the day, Davis delivers a highly charged work of fiction, a compelling testament to the human condition and the healing power of art. Written with immediacy, style and an overwhelming sense of empathy, Smash all the Windows will be enjoyed by readers of How to Paint a Dead Man by Sarah Hall and How to be Both by Ali Smith.

If you do read Smash all the Windows, I'd love to hear what you think of it.

www.darlenejonesauthor.com
Posted by Unknown at 2:59 PM

Email ThisBlogThis!Share to TwitterShare to FacebookShare to Pinterest
Labels: Jane Davis, Smash all the Windows