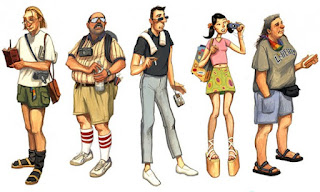 WE’VE ALL ENCOUNTERED THEM, the tourists who don’t speak the language and keep repeating themselves at ever increasing volume when the waiter or clerk doesn’t understand. We’ve seen these tourists try speaking slower, enunciating every word and then turn to their companions and complain about the stupidity of the waiter before they yell, “Checko!”

Then there are the ones who don’t try to communicate verbally. Instead they pick up their empty coffee mug, rap the bus boy on the arm with it and hold it up for a fill. Yep that’s the way to make yourself look good.

Tourists are obnoxious in other surprising ways. We arrive at our place in Mexico and begin setting up for the winter which entails many repairs (tropical climates are harsh in their own way), and setting up the satellite, etc. In the process we discover that our Internet isn’t working properly.

Our caretaker/manager tells us that last year a guy staying next door told her that the owners of the house were friends of ours and that we said he could hook into our wi-fi, which he did because our caretaker took him at his word. When my husband saw the man, he set him straight and asked, “Would you do that in Canada?” to which, he answered no? So what is it about being away from home that gives some people permission to cross lines?

While we were in the fruiteria an old male tourist came in asking for snow peas. He waved a scrap of paper that had something written on it at the young lady behind the counter. Not surprisingly, she looked puzzled as I could see the words made no sense in Spanish or English.

I was furious that he would be so crude with the two young girls working in the store and let him know exactly what I thought of his behavior. I didn’t want to let him get away with it and I wanted the girls to know that I, for one, would defend them.

This particular episode got me to thinking of the times I had witnessed the ugly tourist and hadn’t spoken up. I won’t make that mistake again.