Can war ever be stopped? 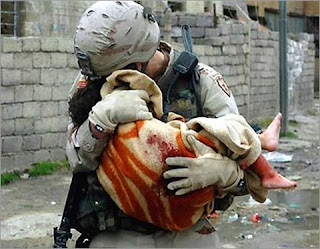 Vivid memories of my youth center on the “cold war.” Friends at school talked about their big brothers building and selling bomb shelters. Parents talked about how to provision a shelter. They discussed, in hushed tones, ways to protect their children or, even more frightening, ways to ensure the family died together.
Coupled with those memories are the ones from the era of UFO mania. We feared alien invasion, or worse—abduction. We speculated endlessly about where they might take us, what experiments they might perform on us.
Back then I was young and naive and a dreamer. I had a notion that war could be stopped if only Earth were to be attacked by an external force. Russia and the US would surely fight side by side against an invasion and who better to invade than aliens.
It was easy to make the aliens the bad guys, fierce beings that wanted Earth for their own nefarious needs. If only they would attack, we would be one happy world, living peacefully side-by-side—of course that would be after we defeated the invading forces.
Now, much older, and perhaps a bit wiser, I know how futile dreams are and I know that there are no easy solutions, but as I watch the news daily, see the horrors of war and refugees, the brutality of racism, the endless dramas that play out around our planet, the proliferation of weapons and fanatics, I dearly wish that my childhood notion wasn’t so far fetched.
In my Em and Yves series, I wrote the “notion” of my youth. I created a magical solution, one where aliens do indeed come to Earth—not as invaders, but as saviors. They work to “fix” our world for us and among the many things they do, they find a way to stop war.
The big question from all of this, of course is: Can war be stopped? If so, how? Or are humans destined to self-destruct?
What do you think?