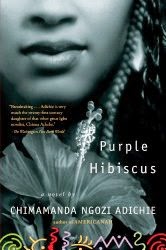 Some readers see my books as anti-religion. Others ask me if the heroine is God. When I began writing my first novel, religion was the farthest thing from my mind. I was focused on romance, adventure and sci-fi elements that could bring some magic to my story.

I’ve abhorred organized religion for many years and many reasons. I’ve particularly been enraged by missionaries. Their self-righteous imposition of their beliefs on others seems to me the greatest of sacrilege.

Fifteen-year-old Kambili is the dutiful and self-effacing daughter of a rich man, a religious fanatic and domestic tyrant whose public image is of a politically courageous newspaper publisher and philanthropist. No one in Papa's ancestral village, where he is titled "Omelora" (One Who Does For the Community), knows why Kambili¹s brother cannot move one of his fingers, nor why her mother keeps losing her pregnancies.

Papa, of course, passes on the lessons he has learned in his own childhood, taught by brutal Catholic missionaries; the abused is the abuser. Rigid religious instruction, intolerant and unforgiving, is the tool with which this man terrorizes his wife and children.

Most frightening of all is the family’s acceptance of this man’s behavior, and long after the abuse ends, the lasting desire for his love.