Who knew a book about math could be so entertaining?

Who knew a book about math could be so entertaining? Thank you to my Venezuelan friend who introduced me to this book. Originally written in Portuguese, she received a Spanish translation and here it is in English.

May 6 was the National Day of Mathematics in Brazil. This day was chosen because it was the birthday of Julio Cesar de Mello e Souza, a maths teacher from Rio de Janeiro, who was also the author of Brazil's most famous literary hoax, O Homem que Calculava (The Man Who Counted), which is also one of the most successful books ever written in Brazil.

It's a hoax because when the book was first published in 1932, it was said to be the work of an Arabian author, Malba Tahan. 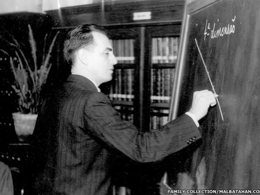 Melle e Souza created Tahan because he realized that it was easier to get published in Brazil, during the 1930s, if you used a foreign pseudonym. Apparently Brazilian publishers didn't have much faith in local authors.

Mello e Souza created an elaborate history for Malba Tahan. Born in 1885 near Mecca, he had traveled all over the world, including - bizarrely - a 12-year stint in Manchester where his father was a successful wine salesman. Malba Tahan had died fighting for the liberty of a group of Bedouins in the desert.

When Mello e Souza began writing as Malba Tahan, only the proprietor of the newspaper that printed the stories was in on the joke. For several years no-one knew that the famous Arab author was actually a local maths teacher whose other passion was collecting porcelain frogs. When eventually Malba Tahan was outed as humble Julio Cesar de Mello e Souza, however, he was famous enough for it not to matter.
http://hoaxes.org/weblog/comments/man_who_counted
www.darlenejonesauthor.com
Posted by Unknown at 4:00 AM