It's so quiet here 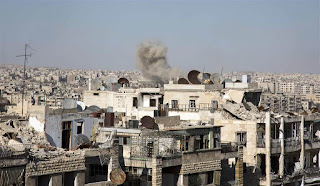 “We need you to interview a couple who have applied to teach in our province,” said the government voice at the end of the line.

“O-kay,” I said wondering why they couldn’t do it themselves.

“They’re from Lebanon and they only speak Arabic and French.”

Aha, that explained it. We had many immigrants coming into our city from war torn areas of the world and the Lebanese civil war was on-going at the time.

“We need you to evaluate their French language competency.”

A date and time were set and I met the couple in the appointed government office. I talked to each of them in turn.

The wife was shy and timid, but her French was fine. The husband was more willing to talk about conditions in Lebanon.

“I was a teacher,” he said. “They took my job away and sent me to work at the airport. Every morning I said good-bye to my family not knowing if I would see them again. Every morning a guard pointed a gun in my chest and asked me to produce my identification. The same guard. Every morning. As if he didn’t know who I was. We were so lucky to come to Canada. We had to come. I couldn’t risk the lives of my wife, my children.”

All these years later, especially as I watch the news of war and strife around the world, one phrase echoes in my head. “It’s so quiet here.”