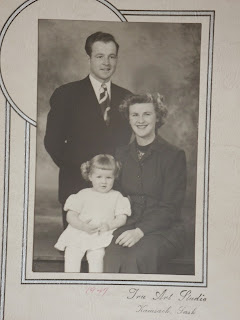 I grew up with a mother who had a saying for everything. They were always prefaced with the words, “As my mother used to say….” Her mother was Belgian and my mother claimed that the sayings rhymed in Flemish and sounded so much better. I have to doubt that, for what kid would like hearing these even in rhyme?

When we were playing too rough:
“Someone will end up crying.” Of course someone did run to Mom in tears and then it was:
“If you live long, you’ll get hurt lots yet.” Which wasn’t as callous as it sounds for she always had sympathy for true hurts.

If we stubbed a toe or banged a knee:
“It’s the badness coming out in you.”

If we were upset about something, depending on the situation it would be:
“It’s a great life if you don’t weaken.”
“Live and learn.”
“It could happen to anyone, but the dumbest first.”

If we were swamped with work:
“There’s no rest for the wicked.”
“Never leave till tomorrow what you can do today.”

I hated the sayings and swore I would never use them with my own children. And then came the day I heard myself say, “As my mother used to say, ‘It’ll be in the last place you look for it.’”
As an adult, I’ve come to appreciate the bits of wisdom contained in these sayings. One in particular, strikes me—especially when I’m watching the news.
“It takes all kinds to make a world, but some we could do without.”

But, perhaps the wisest of all:
“Believe half of what you read and nothing of what you hear.”