The construction of a novel 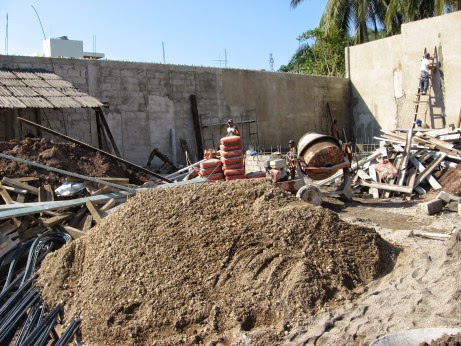 To the layperson observing a construction site, it's often difficult or impossible to visualize the finished project. In small town Mexico, where most construction is by done by manual labor, the dichotomy is even more pronounced as evidenced in these pictures. 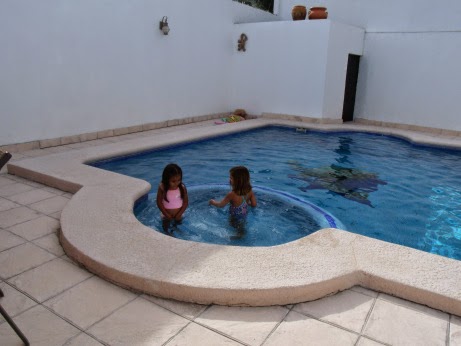 As an author, I can say that the before and after of constructing a novel isn’t all that different as evidenced in these examples.

The man uttered a crazed laugh as he loomed over her clearly expecting her to cower and plead for mercy. Instead she flowed into his attack, blocked his swing with her left hand on his wrist, blended her body to his and used his forward momentum to throw him over her hip to the ground. He was a big man and her throw, though clumsy, slammed his head against the door jamb knocking him unconscious.

The guys I trained with should see this. Hell, they should be here with me. Jake too.

The man’s body blocked the one behind him. In her peripheral vision she caught sight of another man attacking from her right, with an arching back swing. She blocked his motion, grabbed his wrist with her right hand, his upper arm with her left and slammed his elbow against her raised knee. The blow was not strong enough to smash the joint but it did send the knife flying from his hand. He bent forward reflexively tucking the injured elbow into his side and she hammered his head with a closed fist sending him sprawling across the church doorway.

She spun to face a third man swinging wildly at her, ducked, slammed her shoulder into his hip, grabbed his legs behind his knees, lifted and sent him back down the steps. His falling body flattened two of the men still pushing forward and momentarily slowed the advance. A man grabbed her from behind. She reacted with a head butt and knew she had broken his nose when she felt warm blood and snot splattering the back of her neck.       From EMBATTLED

“I have never told anyone about this, Victor. Not even Steph. They started when I was in first grade and continued almost daily for exactly two years.”
“What started?” Vic asked when she fell silent.
Jasmine sighed and a look of utter contentment came over her. “I would call them dreams, but I can’t because they happened when I was awake. They were more like experiences, like I was living someone else’s experiences along with them. I say that because I never felt I was alone. I was always with her. Maybe in her would be a better way to describe it.” From EMPOWERED

“You’re so beautiful.” He kissed her hand, her hair, her eyelids. “I love you,” he whispered. He didn’t need to say it. She knew.
“You must.” She giggled. “If you say I’m beautiful. I like the lie.”
“Abby, please, don’t joke. It’s not a lie.”
“Sam, give it up.” They were silent for a time.
“Abby, know this, I love you. I have for a long, long time and I will forever.”
“Sam,” Abby raised herself on one elbow to look down at him. His eyes were closed. “Sam? Look at me.”
“I don’t need to open my eyes to see you, Abby dearest. You are in my heart where you belong, where you will live forever.” He smiled. “It’s all right Abby. Everything is fine.”
“Sam, open your eyes.”
“I love you.”
That was the last thing Abby remembered.  From EMBRACED

Tory took Emily’s hands in her own. “Can you stay away? Tell me honestly. You’re in love with Yves. You’ve got the kids and Essan sleuthing for you. You’re training with CC and me. You’re friends with Elspeth and Teeg and Exelrud and Zo. You’re embroiled in our lives whether you like it or not. Not to mention that you think something is dreadfully wrong up here, something none of the rest of us sees.”
Something is wrong.
“If you are right, you’re needed here. Desperately. And if you’re not, you’re still needed here. Yves needs you. He won’t be able to function without you.”
Emily sniffed. “He did before.”
“No, he didn’t. He was never without you.”
“You’re talking about those other women?”
“You, it’s always been you. No matter your name, no matter the time, it’s always been you.”
From EMBROILED

Email ThisBlogThis!Share to TwitterShare to FacebookShare to Pinterest
Labels: before and after, construction, novel, novel writing, scenes